There are several critical factors that must be evaluated to determine if an individual is worthy of any type official declaration or veneration authorized by the Roman Catholic Church. 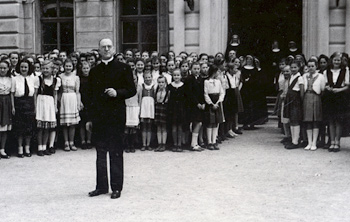 Father Flanagan’s mission work is known throughout the world and has inspired thousands to emulate his service to youth. Millions of at-risk youth have been saved through his own mission, inspiration and example. Those accomplishments while worthy of praise do not necessarily demonstrate heroic virtue or sanctity that would lead to any level of official veneration by the Church.

For this, we the laity (actors) and ultimately the Church, must thoroughly examine his motivations, his words and his actions. Who was this man and why did he do what he did, especially when it may have appeared no one was watching him?

His entire life from birth to death must be examined to determine among several things if his character and motivations provide evidence of heroic virtue and sanctity.

“Without God at the beginning,
there can be only confusion at the end.”

Definition of Heroic Virtue according to the Catholic Encyclopedia:

“Benedict XIV, whose chapters on heroic virtue are classical, thus describes heroicity: ‘In order to be heroic a Christian virtue must enable its owner to perform virtuous actions with uncommon promptitude, ease and pleasure from supernatural motives and without human reasoning, with self-abnegation and full control over his natural inclinations.'”

Heroic virtue is a habit of good conduct that has become a second nature, a new motive power stronger than all corresponding inborn inclinations, cable of rendering easy a series of acts each of which, for the ordinary man, would be beset with very great, if not insurmountable difficulties.

Such a degree of virtue belongs only to souls already purified from all attachments to things worldly, and solidly anchored in the love of God. Some characteristics of heroic virtue include:

Definition of Sanctity according to the Merriam-Webster’s Dictionary:

We encourage everyone to go beyond the legend of Father Flanagan and the obvious success of his mission work, Boys Town. Instead we ask you to join us with examining his character and motivations. It’s there you will see the light of Christ shining through and all around Father Flanagan. His true example is that we are all called to holiness and will accomplish great works by surrendering ourselves completely to the will of God.

Signs of Holiness in Father Flanagan: